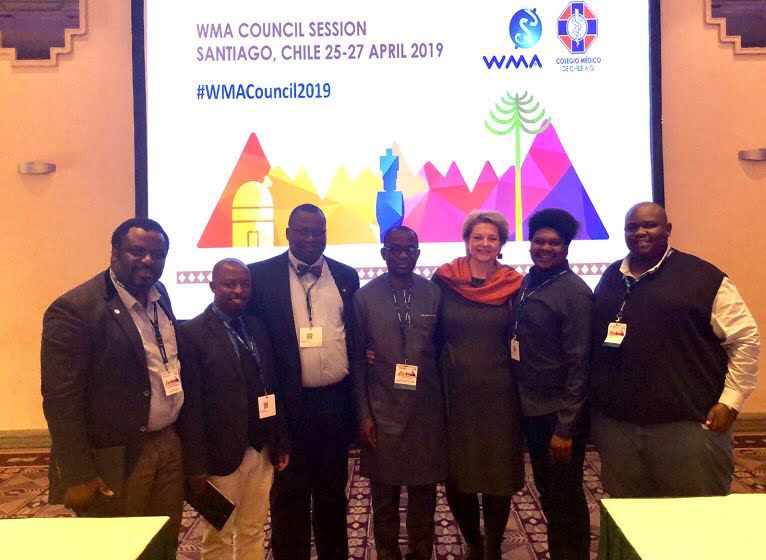 At the election which held during the 212th Council meeting of the World Medical Association, WMA, on Friday, 26th April, 2019 in Santiago, Chile, Dr. Enabulele was unanimously elected, thus making him the first Nigerian to ever hold such an enviable position since the WMA was founded in 1947.

Following his election, Dr. Enabulele is now a member of the Executive Committee of the WMA.

The WMA has only three standing committees and SMAC is one of them.

The Socio-Medical Affairs Committee (SMAC) is saddled with the responsibility of handling/ presiding over global issues bordering on social-medical affairs, including right based issues in healthcare, social determinants of health and all other issues bordering on non-ethical aspects of medicine.

Shortly after his historic election, he chaired his first session as Chairman of SMAC.

In his remarks, Dr. Enabulele thanked members of the WMA for reposing great confidence in him and electing him to head such an important global platform. He assured them that he will, under no circumstance, betray the confidence reposed in him.

Dr. Enabulele equally assured members that though he is the sole African representative serving on the WMA Council, his global work as SMAC Chairman will be carried beyond Nigeria and Africa, for the benefit of citizens of the world.

In his words, “My team and I shall work tirelessly to provide far reaching solutions to global issues bordering on social-medical affairs, including right based issues in healthcare.

Dr. Enabulele is a Chief Consultant Family Physician and a former President of the Nigerian Medical Association (NMA).

As President of the NMA, he was lauded for the reforms implemented during his tenure, particularly in the area of reforms in the healthcare system, the initiation of a free Medical Mission in the year 2012 that has attended to the healthcare needs of over 70, 000 indigent Nigerians, the welfare and working conditions of doctors in the West African country, amongst others.

Some stakeholders have lamented the deplorable state of federal roads in their respective areas, saying the situation is adversely affecting the socio-economic lives of the people. one of the bad roads in Bayelsa The respondents who spoke with our correspondents in Plateau, Taraba, Nasarawa and Kogi, urged the Federal Government to urgently rehabilitate the roads […]

…Media criticism aided my achievements — Ambode By Olasunkanmi Akoni and Monsuru Olowoopejo Vice President Yemi Osinbajo has tasked media professionals to take control of the new media space in the country, saying their activities if not well managed, could serve as major setbacks for the profession. VP Osinbajo Osinbajo also urged the media to […]

By Jimitota Onoyume  Members of Catholic Diocese of Warri, Delta state have embarked on a march against ritual killings, internet fraud by Yahoo Boys, pleading that they could still make it in life if they embraced hard work. Led by Reverend Father Emmanuel Obadjere, Director Justice Development and Peace Commission, JDPC of the Diocese and […]